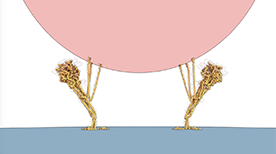 A dynamic simulation and visual model of how the SARS CoV-2 Spike protein drives fusion of viral and cell membranes. Binding of the S1 spike trimer ‘cap’ to an ACE2 receptor triggers release of S1 and unveils the S2 trimer below. Extension of S2 leads to embedding of hydrophobic fusion regions into the host cell membrane. Once tethered to both viral and cell membranes, refolding of S2 on itself drives membrane fusion and release of the viral genome into the host cell cytoplasm. 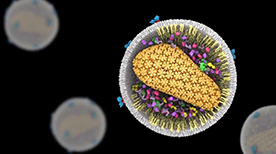 How does HIV infection occur? This molecular animation depicts the process of how HIV infects a T cell and transforms the cell into a viral factory.

» View the animation at Science of HIV 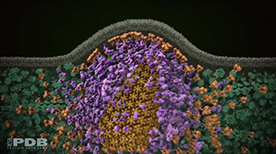 After HIV enters a T-cell, three enzymes play essential roles in the life cycle of the virus. Reverse transcriptase copies the viral RNA genome and makes a DNA copy. Integrase inserts this viral DNA into the cell’s DNA. In the last steps of the viral life cycle, HIV protease cuts HIV proteins into their functional parts. This animation from the Protein Data Bank describes the key events and molecular actors in HIV’s complex choreography.

» View the animation at RCSB PDB 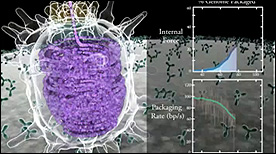 This 2-part Maya animation depicts the process of nucleic acid packing/assembly into the viral capsid. Part I shows the process simultaneous with the measured kinetics of packing and force (displayed on the right). 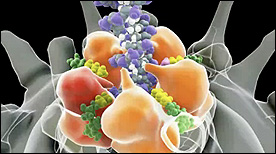 This 2-part Maya animation depicts the process of nucleic acid packing/assembly into the viral capsid. Part II focuses on the molecular machinery responsible for pulling the nucleic aacid strand inside the capsid. 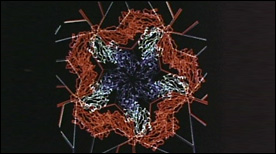 This 1981 landmark molecular animation was programmed in GRAMPS and captured from a computer screen with a Bolex 16 mm movie camera. Elegantly choreographed and paced, the movie presents the structure of the tomato bushy stunt virus (TBSV) – the first viral structure solved at atomic-resolution (2.9 angstroms) by Steve Harrison in 1978. Morphing animations of capsid proteins are also shown and explain the swelling of the viral particle observed at high pH. 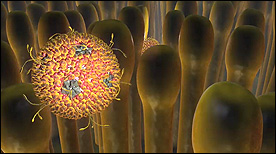 A more in-depth look at the early events of reovirus entry. This current version highlights each of the 8 proteins that make up the virus as well as its icosahedral symmetry. The virus is activated upon trypsin ‘attack’ and cleavage of the outer protein layer. The virus then binds to and enters the cell via the JAM-1 receptor and clathrin-mediated endocytosis. 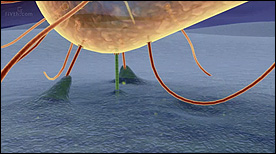 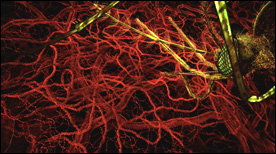 This animation represents part-1 of a 2-part series depicting the events of the malaria parasite lifecycle.
The parasite is shown entering the human host following a mosquito bite and we follow its progression initially to the liver and subsequently targeting erythrocytes on a large scale. 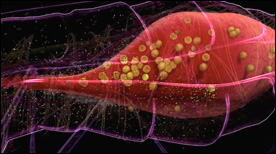 Part 2 depicts events in the mosquito host. The malaria parasite is shown reproducing in the mosquito’s stomach followed by the development of cysts and infection of the salivary glands. 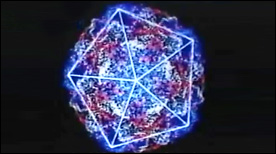 This 1985 animation (programmed in GRAMPS) describes the structure of the poliovirus (seen here at near-atomic resolution). Icoshedral symmetry of the capsid, positioning and interaction of each of the V 1 – 4 proteins is described in detail. 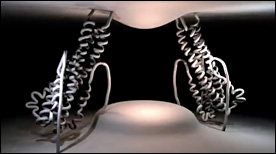 This Maya animation depicts the process by which HIV’s gp41 protein mediates the fusion of viral and cellular membranes during virus entry. In addition, strategies for inhibiting this process with peptide or small molecule inhibitors are shown. 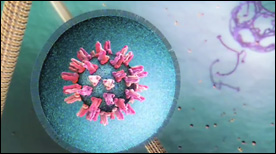 A narrated animation depicting the events that lead to Dengue virus entry into a host cell. In particular, rearrangements and conformational changes in the Dengue glycoprotein E are shown. These lead to membrane fusion and subsequent release of the viral payload into the host cell cytoplasm. Created for WGBH. 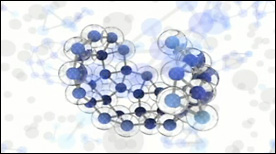 A Maya-rendered visualization of a VMD molecular dynamics simulation. Created for David Chandler’s lab at UC Berkeley, this movie depicts the physics of viral capsid formation while summarizing some of the technical steps involved in its creation. 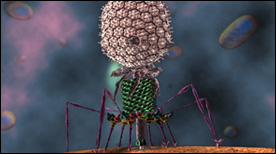 An accurate visualization of the Bacteriophage T4 based on Cryo-EM datasets of the virus. The scope of the animation is to show the infection process of T4 into an E. coli cell. All scientific data sets and motion based off of research from Michael Rossmann Laboratory (Purdue University).